This week, we head into camp with the Queensland Reds.

In 2016, the Reds’ set piece has been amongst the front-runners in the Super Rugby competition. The Queenslanders own the premier lineout at this stage of the season (91.6% success rate), while their scrum has also been a strong point, returning an impressive 94% success rate. 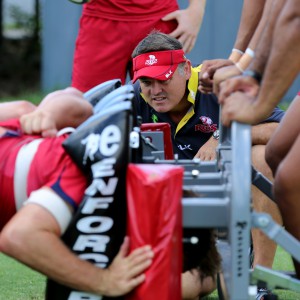 The man overseeing the forward pack is co-head coach Nick Stiles. Stiles was himself a formidable front-rower in his playing days, representing the Reds on 93 occasions and playing 12 Tests for the Wallabies. Since hanging up the boots, he has coached both the Western Force (2010-2013) and Reds (2014-current) in Super Rugby, as well as guiding Brisbane City to back-to-back titles in the National Rugby Championship.

Enforcer caught up with ‘Stilesy’ to get his insight into the Reds’ pack and scrummaging in general.

Enforcer:  The Reds have boasted the strongest scrum of the Australian teams throughout the 2016 Super Rugby season. What’s been the secret to this success?

Nick Stiles: We’ve had technical improvement through our forwards; we’ve worked hard throughout our preparation with a mixture of live scrums and the use of the Enforcer scrum machine. This has increased the competition within the pack as we’ve been able to replicate the intensity of a game situation in our training.

E: You lost James Slipper (injured), James Hanson (Rebels) and James Horwill (Harlequins, UK) from the Reds’ scrum for this season. How did you go about covering these players?

NS: It’s been a couple of years of work – it was important that we had a good pathway and succession planning with our props in particular, so that if you get injuries or players moving on you can cope with it. We’ve got some impressive young players who have been working hard over a number of years so they were able to step up when they were needed.

E: How important is the scrum in the modern game?

NS: It’s still the old adage, if you have a good set piece ball for the backs it gets them front foot ball. A dominant scrum is crucial. The new scrum laws [introduced last year] have taken the big engagements out of play, so we’ve had to do a lot of work in pre-season to get the forwards capable of scrummaging for a long time.

E: How do you go about preparing the Reds’ scrum for each match?

NS: We review our previous performance and look at what we can improve, then we look at the opposition and identify any weaknesses or opportunities for us to target. We use a combination of live scrums and the Enforcer scrum machine to prepare for the match. Using the Enforcer particularly late in the week is crucial as it allows us to continue to prepare well without having to use live scrums closer to the game.

E: As a former Test prop yourself, what are the main technical challenges that confront a front-rower?

E: What would be your scrummaging advice or top scrum tip for any budding front-rower?

NS: Work hard from a young age on developing your core strength, without that you won’t be able to hold the good shape that you’re required to in the modern scrum.

E: Have you a motto or expression that you live and train by?

NS: You’ve got to earn the right to go forward.

The Queensland Reds will resume their 2016 campaign against the Brumbies on Friday, 1 July.