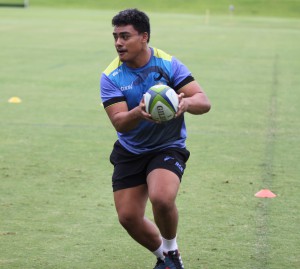 Welcome to the Enforcer blog! Through these entries we’ll celebrate the gloriousness of scrums and forward play; we’ll get tips and insight into the dark arts of scrummaging, set piece and the breakdown; and we’ll profile many of the unsung heroes of rugby, whose broad statures, cauliflower ears and broken noses are marks of honour for endless seasons of manning their teams’ ‘engine rooms’.

(Please note: For all our friends in the backs, there is likelyto be far too much REAL RUGBY in these blogs to interest you… for which, we are completely unapologetic!)

This week, we caught up with rising front-rower Shambeckler Vui, who has been selected to represent Australia at next month’s 2016 World Rugby Under 20 Championship in Manchester, England.

Vui, who was a member of last year’s Australian Schoolboys squad, was part of the squad that defeated New Zealand on the Gold Coast this month – the first time Australia has achieved that feat in Under 20 rugby. The tighthead prop currently holds a scholarship with the Western Force’s Future Force Academy.

Enforcer: What are you expecting from the World Rugby Under 20 Championship next month?

Shambeckler Vui: We know it’s going to be tough but Thomo (Head Coach Adrian Thompson) and all the coaches have instilled a lot of confidence in the team and we know we’re going there to win, we’re not going to make up the numbers. It helps that a lot of us have played together in schoolboys or in the Super Rugby Under 20 competition this year.

Being in Manchester, we know conditions will be heavy, and so I’m expecting a lot of scrums and a lot of set piece.

While I see my ball carrying as a strength of mine, this season I’ve made developing my scrummaging a real priority. During the recent Oceania Games on the Gold Coast, [Wallabies Scrum Coach] Mario Ledesma spent two weeks with us and he gave me a lot of tips and I learnt a lot off him.

E: What was the key to what Mario Ledesma said?

SV: Scrummaging is all about attitude; if you don’t have the right attitude leading into a scrum then you can’t expect to be dominant.

E: What would be your advice to other budding front-rowers?

SV: Like Mario said, it’s all about attitude. If you don’t have a good attitude, you can’t expect to scrummage well. You need your technique to be spot on, but even if you’re exhausted from running around you need to be ready to scrum because that’s your role, that’s your bread and butter.

E: You’re a member of the Western Force’s Future Force Academy, but what was the path that led you to Perth and to the Australian Under 20 squad?

SV: I started playing rugby in Year 8 at Ipswich Grammar School In Brisbane. The Director of Rugby there asked if I’d ever played rugby before, I gave it a go and I’ve loved it ever since.

While I’ve always played in the front row in rugby, I was also playing rugby league in the centres, and at school I’d play league on a Friday night, school rugby on a Saturday and club rugby on a Sunday.

Australia kicks off their World Rugby Under 20 Championship campaign against Scotland on Tuesday, 7 June. For more information see http://www.rugby.com.au/teams/australian-under-20s